Of all the cultural materials received from habdvarsha, Nod’s Way, or Hidden Dragon, is unique. A central artifact of dvarsh culture, this book of ancient wisdom is at once a divination tool and a guide for living. It is the basis for the dvarsh calendar, and contains tracks of an unexplained, eldritch numerology yet to be decyphered by humans. A companion to the novels of the Habdvarsha cycle, Nod’s Way is a divination game, a dice oracle for play and meditation.

The oracle is consulted using three special dice. Two identical, eight-sided dice, called The Companions, feature four moon phases and four star symbols on the faces. A single cube, called The Odd Die, has images on only two sides. The basic response to a cast is determined by the symbols showing on The Companions. Together these reflect one of thirty-six possible auspices. If the cube shows a blank side it has no bearing, but if it shows one of its symbols, a ring or a bar, there is an additional element to consider. 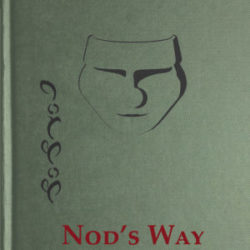 One formal method of consulting the oracle involves three casts of the dice for each question seeking comment. The first cast resonates with the issue as it manifests in the world, in other words, as it seems. The second cast resonates with deep strata, that which is fundamental but not necessarily apparent. The third cast looks toward inherent possibilities. This is a method of dedicated students of Nod’s Way, but that is not to say that all dvarsh are so formal in their usage. There is no single “right” way to explore the work, and each person taking up the dice is free to find a unique approach to the oracle. Dvarsh tradition tends not to be rigid in these things. Rather than command an orthodoxy, the dvarsh invite seekers to follow the past or devise rituals of their own. The key is that a chosen approach should rise from play and respect.

Dvarsh tradition assigns authorship of the oracle to Nod, a mysterious entity who dwelt among them seventeen millennia ago. The book is Nod’s Way because it embodies the teachings of this figure, which center on an approach to living that Nod called Hidden Dragon. The phrase Hidden Dragon in the present context represents the very best potential within each of us and the situations we inhabit. Hidden Dragon is also understood as the reward of dedicated oracular play.

Nod’s Way, the Author’s Edition was released by Stikmantica in October 2019. Completely rewritten and recast, the new volume represents the only definitive text of the oracle. Check out the Design Scrapbook for samples from the creation process.

STIKMANZ NOTE: Nod’s Way, the ancient oracle of the dvarsh, comes as close to being a work of my whole self as anything I have produced. It has drawn upon skills I developed as an author, a poet, an illustrator, a designer, a spiritual explorer, a political thinker, and a clown. I have taken to referring to the totality of it—visual and verbal—as the best poem I have ever made. A somewhat idiosyncratic synthesis of wonder and social responsibility, it is also a celebration of chance and a game for role-playing one’s actual life.

For my own part, the flexible potential of Nod’s Way is one of its most exciting aspects. Designed as a game, a guide and a puzzle unique in each new hand that takes it up, one must ultimately make the oracle one’s own to discover its magic. The best thing, the crucial thing, the one absolutely essential thing about the work is that it is fun. A toy for pilgrims of the mind and heart, no journey toward mystery should start without a copy.